In 1787, the draft federal constitution was submitted to the states for ratification by popularly elected state conventions. In New York, the Anti-Federalists argued that the new and more powerful national government operating under a constitution that did not include a Bill of Rights would seriously endanger both the rights of individual citizens and the rights of the states. The Federalists believed that individual rights were fully protected by state and common law, but to ensure ratification, agreed that a series of amendments protecting individual rights would be introduced at the first Congress convened under the new Constitution. Of these 12 amendments, 10 were ratified by the states and became the Bill of Rights. The draft constitution, the ratification statement on behalf of New York and the direction to the New York delegates are reproduced here.

More information about New York’s ratification of the federal constitution is available in our Legal History by Era Revolution & the Emerging State: Canals, Railroad & Steamboats, 1777-1846. 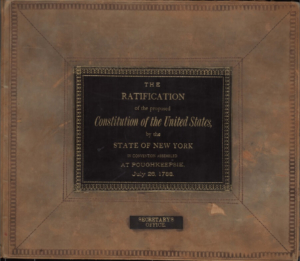