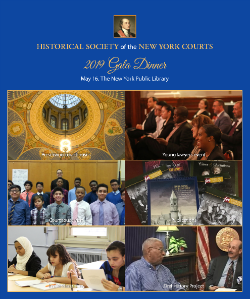 In April, we brought together a cross-section of the NYS Bench and Bar to discuss why the Society matters. What is its contribution to a just society of informed citizens? How does it foster a deeper sense of community for our lawyers and judges, traversing spectrums of occupations and generations?

After this roundtable discussion, we traveled to George Jackson Academy to film a lesson on the First Amendment, followed by a discussion between a school administrator and a Judith S. Kaye Teaching Fellow.

The Legal History Matters film is a product of these thoughtful discussions.