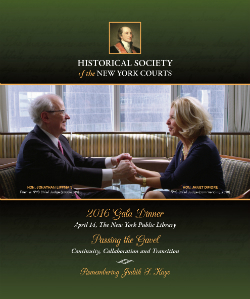 Continuing the tradition of providing the legal community with an opportunity to meet NYS Court Judges, the new Chief Judge and the Former Chief Judge spoke to the lawyers and judges gathered to hear them, both on film and in person. The New Chief spoke of her commitment to continuing the legacies of Judges Kaye and Lippman to access to justice, and gave a glimpse into what her priorities would be in the years ahead.

The Society brought together our new Chief Judge in conversation with her successor in a warm film that helped introduce her to the legal community. Both included deeply felt personal remembrances of their colleague, Former Chief Judge Judith S. Kaye.