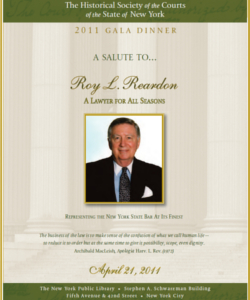 WE SALUTE ROY L. REARDON
A Lawyer for All Seasons

Roy Reardon, in addition to being the Exexutive Vice President of the Society, is one of the most prominent attorneys New York State, having argued extensively in the state and federal courts. Perhaps his best-known case was his pro bono representation of Casey Martin in his suit against the PGA for preventing from using a golf cart in competition. Our 2011 Gala recognized his contributions to New York.