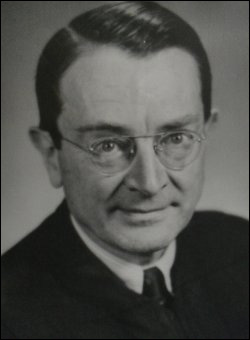 In 1953, Judge Van Voorhis was appointed to the Court of Appeals. See his full biography HERE.

Justice John Van Voorhis has been praised for his “diligence, fidelity, impartiality and courtesy.” And, of his record and his opinions, it is said that they “justify an estimate of high level ability and learning.” (Brief Biographies of the Nominees, New York Times, September 23, 1954,
p. 30.)

Van Voorhis was born on June 14, 1897 in Irondequoit, New York, just outside of Rochester. As a young man he attended The Hill School in Pottstown, Pennsylvania and Yale University, graduating in 1919. He did not attend law school but rather studied under his father and uncle at their law firm John Van Voorhis & Sons in Rochester. Bar admission followed in 1922, and he then began practicing at that firm.

In the late 1920s he became active in Republican politics. He was named Town Attorney in Irondequoit in 1928, holding that position until 1936, at which time he was elected to the Supreme Court, 7th Judicial District. Van Voorhis was nominated by the Republican party for election to a vacancy on the Court of Appeals in 1944 but was defeated.

Governor Dewey designated him to the Appellate Division First Department in 1947, a move which was frowned upon by some because the Governor chose an upstate justice rather than one from the Supreme Court bench in New York or Bronx county. In 1953 Governor Dewey appointed Van Voorhis to fill a vacancy on the Court of Appeals. The following year he successfully ran for that seat on both the Republican and Democratic lines.

Upon reaching the mandatory retirement age of 70 in 1967, Justice Van Voorhis left the bench to continue practicing law, this time with his son at Van Voorhis & Van Voorhis. He also taught at New York Law School. In 1968 he was appointed by the U.S. District Court, District of Connecticut, as Special Master in the reorganization proceedings involving the New York, New Haven and Hartford Railroad Company.

Van Voorhis married Linda Gale Lyon Van Voorhis in 1928, and they had three children. In his spare time, the judge enjoyed sailing and classical music. He at one time played the flute in the Rochester Symphony Orchestra. Justice Van Voorhis passed away at age 86 on November 25, 1983.

The Judges of the Court of Appeals, A Biographical History, Albert M. Rosenblatt [ed.],
The Historical Society of the Courts of the State of New York, 2007, pp. 621-632.