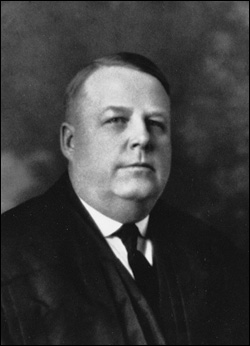 Justice John C. Crapser was born September 8, 1873, in Winthrop, St. Lawrence County. Later the family moved to a large dwelling on Crapser’s Island in the Town of Waddington of the same county, which island was continuously occupied by family members until flooded by the St. Lawrence Seaway. He was educated in the common schools, later attended Potsdam State Normal School, after which he pursued the study of law at the University of Michigan and graduated in 1896. Then he studied law with Congressman A.X. Parker in Potsdam. He was admitted to the Bar by the Third Department in November 1897. He opened a law office in Hogansburg, Franklin County, but shortly relocated to the larger Massena in St. Lawrence County. He served as supervisor of Massena and then assistant district attorney in St. Lawrence County and then as elected St. Lawrence County District Attorney. He was elected St. Lawrence County Judge in 1914 and re-elected once. In 1921, he was elected to the Supreme Court for the Fourth Judicial District. He was appointed to the Appellate Division, effective January 1, 1933, and served on the appellate court until he retired in 1943 at age 70. He returned to private practice in Massena with his son under the firm name, Crapser & Crapser. He died on February 14, 1956.