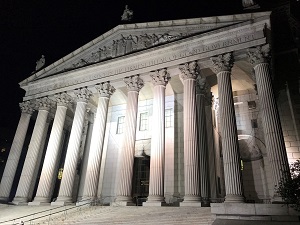 The New York State Supreme Court Building, also known as the New York County Courthouse, 60 Centre Street, New York, NY, first opened its doors in February 1927. This narrative is mostly about the physical courthouse, 60 Centre Street, and matters related. While obviously individuals, justices, court staff, members of the bar, and others have had such critically important roles throughout the almost 100-year history of this important courthouse (including of course in the all-important legal work of this court), the story to be told here is not much about individuals, but as noted much more about the building itself and its more “material” aspects. The exterior of 60 Centre Street was awarded New York City landmark status on February 1st, 1966, and portions of the interior of the building were awarded such status on March 24th, 1981. 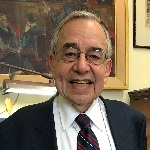 The 7th floor appendage/airy today has four discrete spaces: a commodious conference room, an office for the administrative staff of the Supreme Court, an office for the Chief Clerk of the Supreme Court (at one time known as the “General Clerk” of the Supreme Court) and a “supply room.” But the 7th floor of 60 Centre Street, as originally conceived, was for an entirely different purpose. What is today the Chief Clerk’s office, and the supply room was originally one large room, a large kitchen, with large skylights for venting its stoves. What is today the room used by the Supreme Court’s administrative staff was intended as a large dining room, with its own large wood burning fireplace, in which the Supreme Court justices were served by chefs and other attendants employed by the court. It may be apocryphal, but legend has it that the chefs employed in that kitchen were of German extraction. What is today the 7th floor conference room was intended for use by the then all male Justices as a lounge or “smoking room.” This lounge was embellished all around with Work Progress Administration murals (which survive today) resembling tapestries. The chefs did not “survive” the Depression, the kitchen was decommissioned, and those relics from that earlier, bygone era (an era with its own many economic and social problems) were dispatched. Justices would thereafter bring in or order in lunch or head out to local eateries, many in “Little Italy,” Chinatown, and on the Lower East Side with its very large Jewish community. Those local eateries of the 1930s -1980s are now mostly long gone, replaced by others. Only in April of this year the very popular family restaurant, Forlini’s, 93 Baxter Street, in business since the 1956, closed its doors. Yes, it has been decades since Justices were served by chefs and attendants in their once commodious 7th floor dining room, with the 7th floor long ago transformed for use as described: administrative offices, a conference room, etc., with, trappings of that bygone era largely erased.