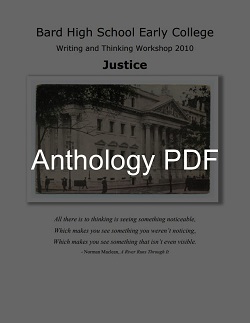 BHSEC welcomes new students each year with a Writing and Thinking Workshop in which students engage a topic in small groups and write, think and discuss the topic in depth. In 2010, the theme of this workshop was “Justice.” Students read from an anthology of sources that included some of the most read texts on the subject, starting with Plato and covering the Founding Fathers to Bob Dylan. The students then explored these ideas in their classrooms and in visits to courtrooms in New York City.