2011 Society Calendar – “The Constitution of the State of New York” 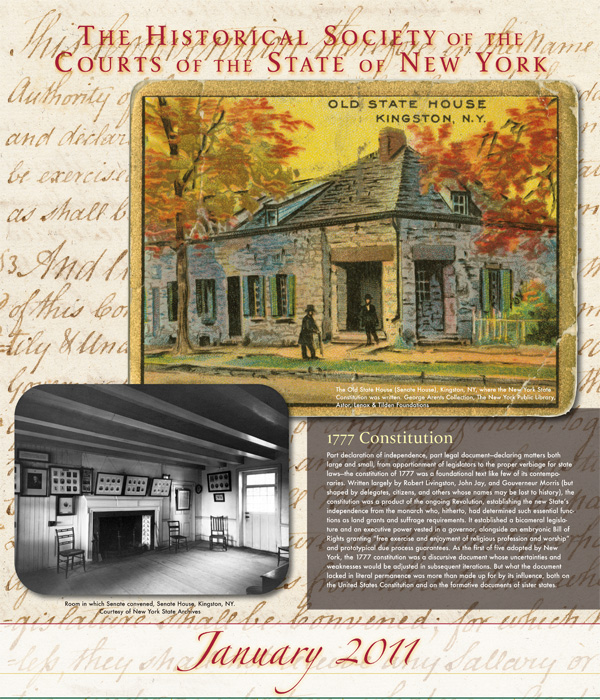 Part declaration of independence, part legal document—declaring matters both large and small, from apportionment of legislators to the proper verbiage for state laws—the constitution of 1777 was a foundational text like few of its contemporaries. Written largely by Robert Livingston, John Jay, and Gouverneur Morris (but shaped by delegates, citizens, and others whose names may be lost to history), the constitution was a product of the ongoing Revolution, establishing the new State’s independence from the monarch who, hitherto, had determined such essential functions as land grants and suffrage requirements. It established a bicameral legislature and an executive power vested in a governor, alongside an embryonic Bill of Rights granting ‘free exercise and enjoyment of religious profession and worship’ and prototypical due process guarantees. As the first of five adopted by New York, the 1777 constitution was a discursive document whose uncertainties and weaknesses would be adjusted in subsequent iterations. But what the document lacked in literal permanence was more than made up for by its influence, both on the United States Constitution and on the formative documents of sister states. 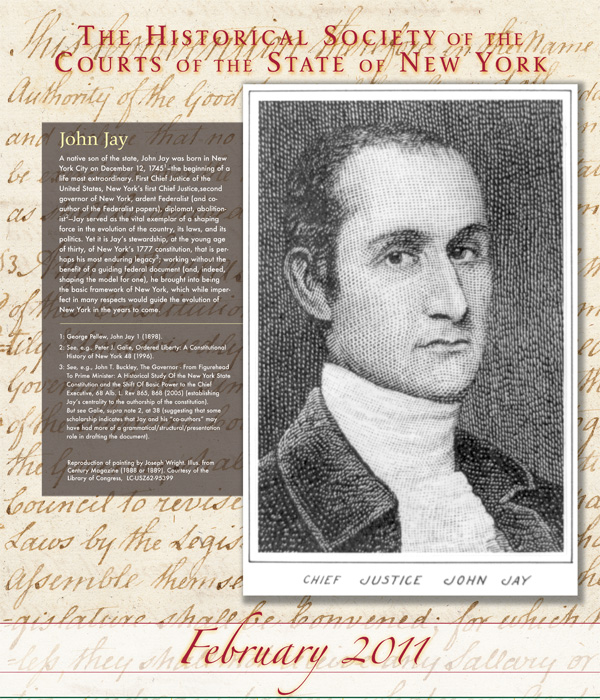 A native son of the state, John Jay was born in New York City on December 12, 1745(1)—the beginning of a life most extraordinary. First Chief Justice of the United States, New York’s first Chief Justice,second governor of New York, ardent Federalist (and coauthor of the Federalist papers), diplomat, abolitionist(2) Jay served as the vital exemplar of a shaping force in the evolution of the country, its laws, and its politics. Yet it is Jay’s stewardship, at the young age of thirty, of New York’s 1777 constitution, that is perhaps his most enduring legacy(3); working without the benefit of a guiding federal document (and, indeed, shaping the model for one), he brought into being the basic framework of New York, which while imperfect in many respects would guide the evolution of New York in the years to come.

3: See, e.g., John T. Buckley, The Governor – From Figurehead To Prime Minister: A Historical Study Of the New York State Constitution and the Shift Of Basic Power to the Chief Executive, 68 Alb. L. Rev 865, 868 (2005) (establishing Jay’s centrality to the authorship of the constitution). But see Galie, supra note 2, at 38 (suggesting that some scholarship indicates that Jay and his ‘co-authors’ may have had more of a grammatical/structural/presentation role in drafting the document). 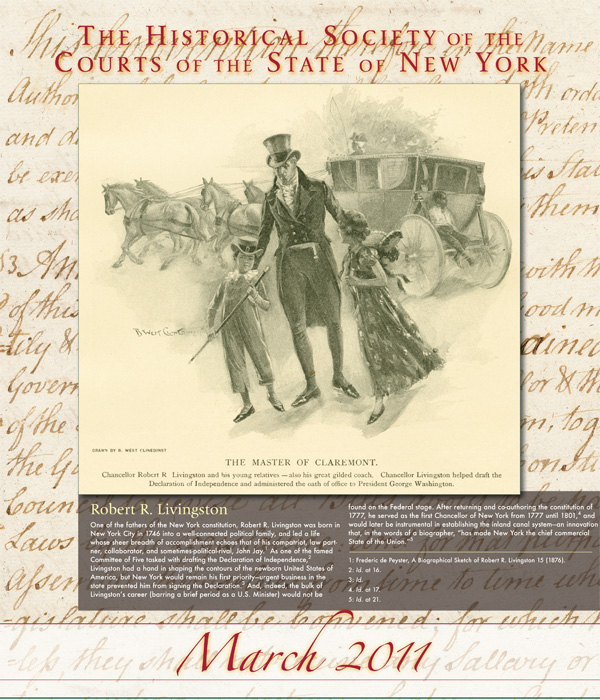 One of the fathers of the New York constitution, Robert R. Livingston was born in New York City in 1746 into a well-connected political family, and led a life whose sheer breadth of accomplishment echoes that of his compatriot, law partner, collaborator, and sometimes-political-rival, John Jay.(1) As one of the famed Committee of Five tasked with drafting the Declaration of Independence,(2) Livingston had a hand in shaping the contours of the newborn United States of America, but New York would remain his first priority—urgent business in the state prevented him from signing the Declaration.(3) And, indeed, the bulk of Livingston’s career (barring a brief period as a U.S. Minister) would not be found on the Federal stage. After returning and co-authoring the constitution of 1777, he served as the first Chancellor of New York from 1777 until 1801,(4) and would later be instrumental in establishing the inland canal system—an innovation that, in the words of a biographer, ‘has made New York the chief commercial State of the Union.'(5) 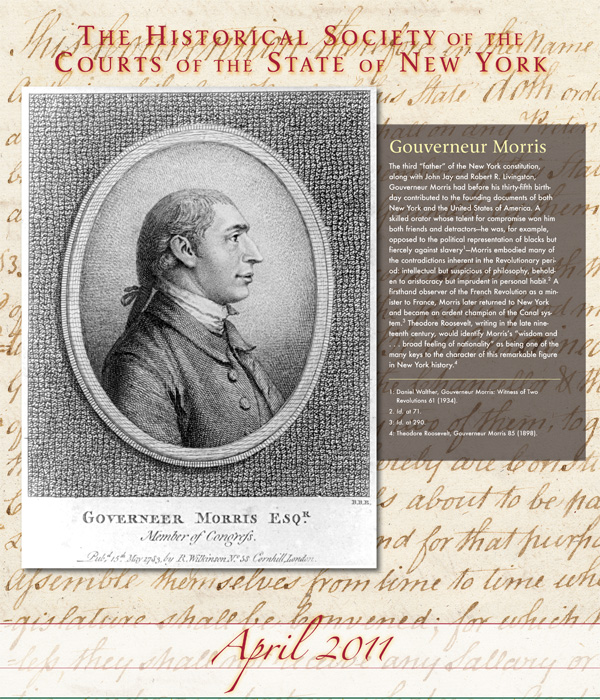 The third father’ of the New York constitution, along with John Jay and Robert R. Livingston, Gouverneur Morris had before his thirty-fifth birthday contributed to the founding documents of both New York and the United States of America. A skilled orator whose talent for compromise won him both friends and detractors—he was, for example, opposed to the political representation of blacks but fiercely against slavery(1)—Morris embodied many of the contradictions inherent in the Revolutionary period: intellectual but suspicious of philosophy, beholden to aristocracy but imprudent in personal habit.(2) A firsthand observer of the French Revolution as a minister to France, Morris later returned to New York and became an ardent champion of the Canal system.(3) Theodore Roosevelt, writing in the late nineteenth century, would identify Morris’s ‘wisdom and . . . broad feeling of nationality’ as being one of the many keys to the character of this remarkable figure in New York history.(4) 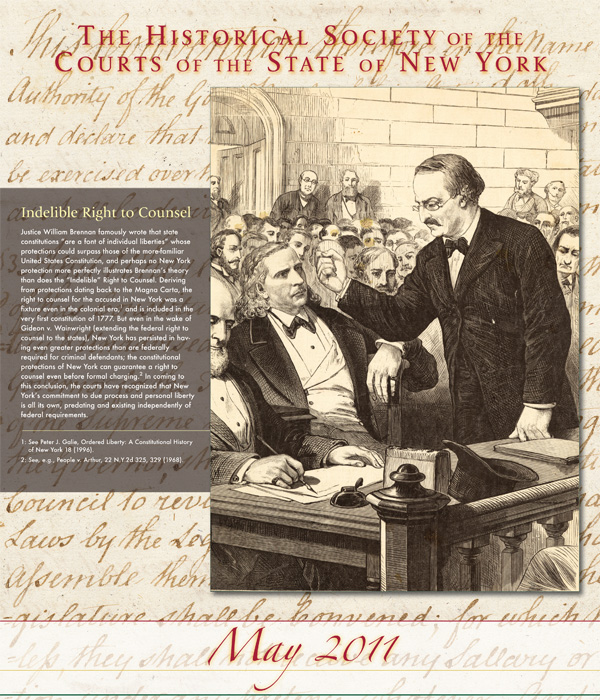 Justice William Brennan famously wrote that state constitutions ‘are a font of individual liberties’ whose protections could surpass those of the more-familiar United States Constitution, and perhaps no New York protection more perfectly illustrates Brennan’s theory than does the ‘Indelible’ Right to Counsel. Deriving from protections dating back to the Magna Carta, the right to counsel for the accused in New York was a fixture even in the colonial era,(1) and is included in the very first constitution of 1777. But even in the wake of Gideon v. Wainwright (extending the federal right to counsel to the states), New York has persisted in having even greater protections than are federally required for criminal defendants; the constitutional protections of New York can guarantee a right to counsel even before formal charging.(2) In coming to this conclusion, the courts have recognized that New York’s commitment to due process and personal liberty is all its own, predating and existing independently of federal requirements. 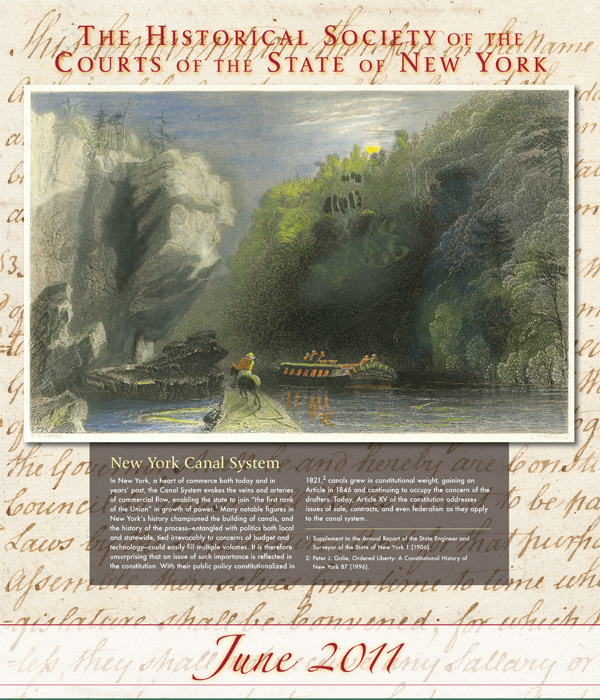 In New York, a heart of commerce both today and in years’ past, the Canal System evokes the veins and arteries of commercial flow, enabling the state to join ‘the first rank of the Union’ in growth of power.(1) Many notable figures in New York’s history championed the building of canals, and the history of the process—entangled with politics both local and statewide, tied irrevocably to concerns of budget and technology—could easily fill multiple volumes. It is therefore unsurprising that an issue of such importance is reflected in the constitution. With their public policy constitutionalized in 1821,(2) canals grew in constitutional weight, gaining an Article in 1846 and continuing to occupy the concern of the drafters. Today, Article XV of the constitution addresses issues of sale, contracts, and even federalism as they apply to the canal system. 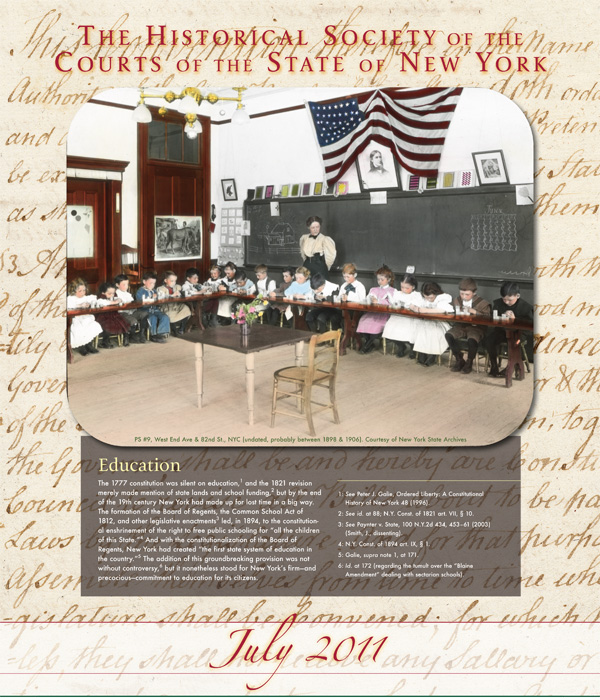 The 1777 constitution was silent on education,(1) and the 1821 revision merely made mention of state lands and school funding,(2) but by the end of the 19th century New York had made up for lost time in a big way. The formation of the Board of Regents, the Common School Act of 1812, and other legislative enactments(3) led, in 1894, to the constitutional enshrinement of the right to free public schooling for ‘all the children of this State.(4) And with the constitutionalization of the Board of Regents, New York had created ‘the first state system of education in the country.(5) The addition of this groundbreaking provision was not without controversy,(6) but it nonetheless stood for New York’s firm—and precocious—commitment to education for its citizens.

6: Id. at 172 (regarding the tumult over the ‘Blaine Amendment’ dealing with sectarian schools). 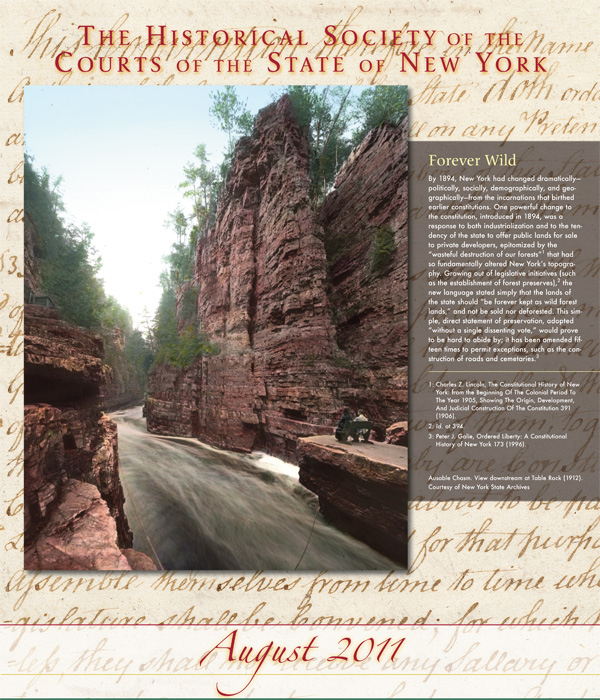 By 1894, New York had changed dramatically—politically, socially, demographically, and geographically—from the incarnations that birthed earlier constitutions. One powerful change to the constitution, introduced in 1894, was a response to both industrialization and to the tendency of the state to offer public lands for sale to private developers, epitomized by the ‘wasteful destruction of our forests'(1) that had so fundamentally altered New York’s topography. Growing out of legislative initiatives (such as the establishment of forest preserves),(2) the new language stated simply that the lands of the state should ‘be forever kept as wild forest lands,’ and not be sold nor deforested. This simple, direct statement of preservation, adopted ‘without a single dissenting vote,î would prove to be hard to abide by; it has been amended fifteen times to permit exceptions, such as the construction of roads and cemeteries.(3)

1: Charles Z. Lincoln, The Constitutional History of New York: from the Beginning Of The Colonial Period To The Year 1905, Showing The Origin, Development, And Judicial Construction Of The Constitution 391 (1906). 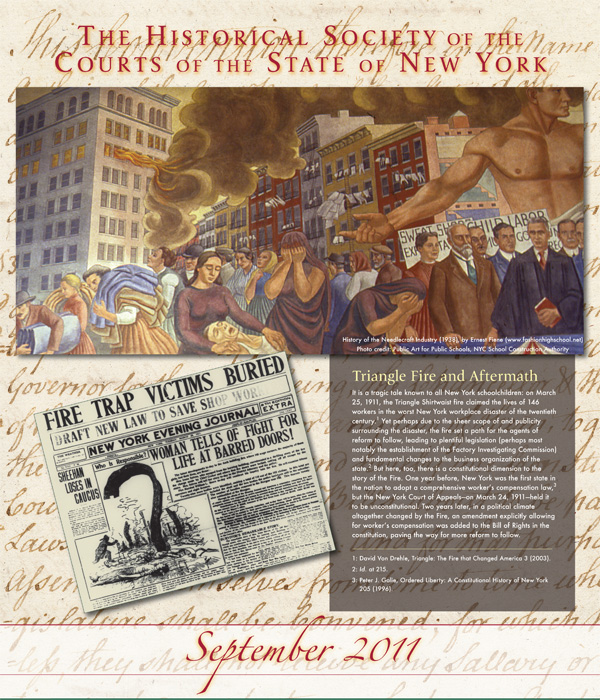 It is a tragic tale known to all New York schoolchildren: on March 25, 1911, the Triangle Shirtwaist fire claimed the lives of 146 workers in the worst New York workplace disaster of the twentieth century.(1) Yet perhaps due to the sheer scope of and publicity surrounding the disaster, the fire set a path for the agents of reform to follow, leading to plentiful legislation (perhaps most notably the establishment of the Factory Investigating Commission) and fundamental changes to the business organization of the state.(2) But here, too, there is a constitutional dimension to the story of the Fire. One year before, New York was the first state in the nation to adopt a comprehensive worker’s compensation law,(3) but the New York Court of Appeals—on March 24, 1911—held it to be unconstitutional. Two years later, in a political climate altogether changed by the Fire, an amendment explicitly allowing for worker’s compensation was added to the Bill of Rights in the constitution, paving the way for more reform to follow. 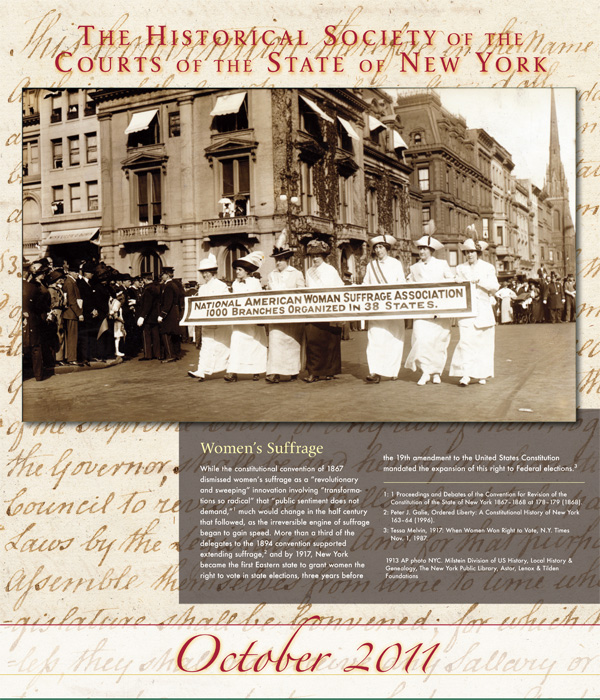 While the constitutional convention of 1867 dismissed women’s suffrage as a ‘revolutionary and sweeping’ innovation involving ‘transformations so radical’ that ‘public sentiment does not demand,'(1) much would change in the half century that followed, as the irreversible engine of suffrage began to gain speed. More than a third of the delegates to the 1894 convention supported extending suffrage,(2) and by 1917, New York became the first Eastern state to grant women the right to vote in state elections, three years before the 19th amendment to the United States Constitution mandated the expansion of this right to Federal elections.(3) 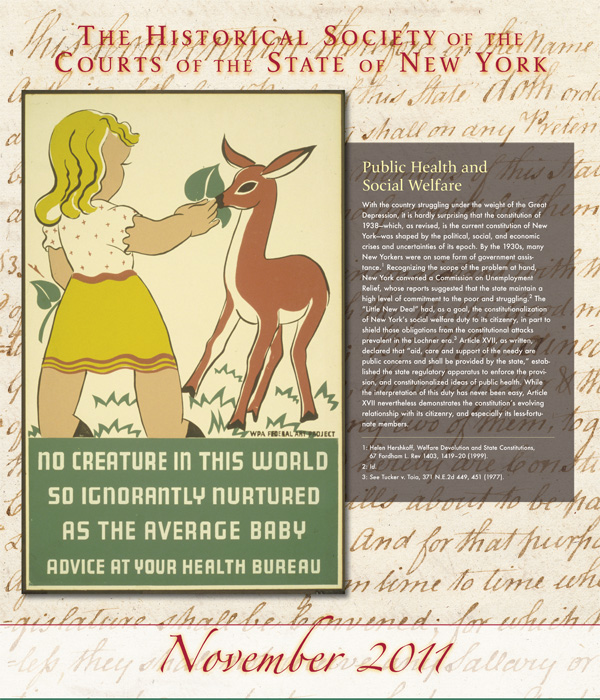 With the country struggling under the weight of the Great Depression, it is hardly surprising that the constitution of 1938—which, as revised, is the current constitution of New York—was shaped by the political, social, and economic crises and uncertainties of its epoch. By the 1930s, many New Yorkers were on some form of government assistance. 1 Recognizing the scope of the problem at hand, New York convened a Commission on Unemployment Relief, whose reports suggested that the state maintain a high level of commitment to the poor and struggling.2 The ‘Little New Deal’ had, as a goal, the constitutionalization of New York’s social welfare duty to its citizenry, in part to shield those obligations from the constitutional attacks prevalent in the Lochner era.3 Article XVII, as written, declared that ‘aid, care and support of the needy are public concerns and shall be provided by the state,’ established the state regulatory apparatus to enforce the provision, and constitutionalized ideas of public health. While the interpretation of this duty has never been easy, Article XVII nevertheless demonstrates the constitution’s evolving relationship with its citizenry, and especially its less-fortunate members. 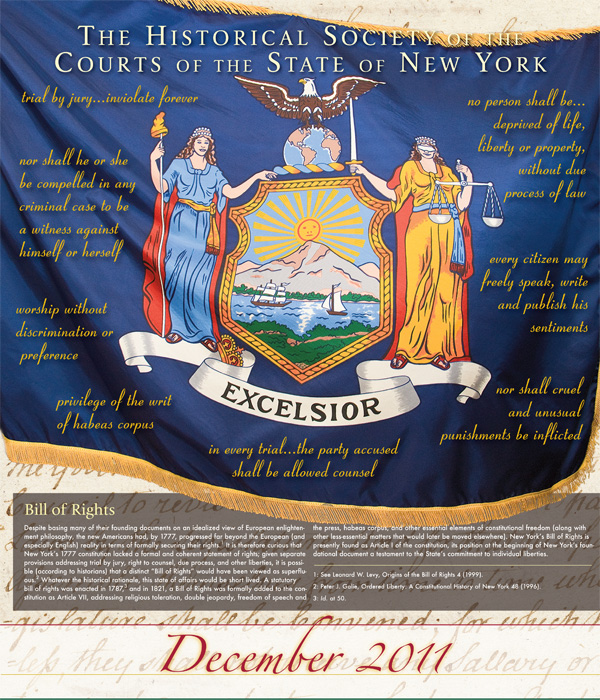 Despite basing many of their founding documents on an idealized view of European enlightenment philosophy, the new Americans had, by 1777, progressed far beyond the European (and especially English) reality in terms of formally securing their rights.1 It is therefore curious that New York’s 1777 constitution lacked a formal and coherent statement of rights; given separate provisions addressing trial by jury, right to counsel, due process, and other liberties, it is possible (according to historians) that a distinct ‘Bill of Rights’ would have been viewed as superfluous. 2 Whatever the historical rationale, this state of affairs would be short lived. A statutory bill of rights was enacted in 1787,3 and in 1821, a Bill of Rights was formally added to the constitution as Article VII, addressing religious toleration, double jeopardy, freedom of speech and the press, habeas corpus, and other essential elements of constitutional freedom (along with other less-essential matters that would later be moved elsewhere). New York’s Bill of Rights is presently found as Article I of the constitution, its position at the beginning of New York’s foundational document a testament to the State’s commitment to individual liberties.