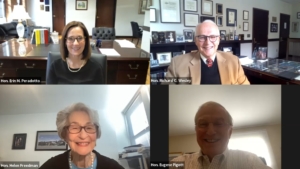 This episode was recorded on November 9, 2021 and features a conversation honoring Hon. M. Dolores Denman.

The late M. Dolores Denman was a true judicial trailblazer; among her feats, she was the first woman appointed as Presiding Justice of any Appellate Division Department. In this special episode of the Judicial Notice Podcast, host Hon. Helen E. Freedman gathers three of Judge Denman’s colleagues and friends — Judge Richard C. Wesley, now of the Second Circuit; Judge Eugene F. Pigott, Jr., former Associate Judge of the Court of Appeals; and Judge Erin M. Peradotto, Associate Justice of the Fourth Department, over which Judge Denman presided — to reflect on Judge Denman’s judicial philosophy, her historic appointment to the Appellate Division, and her influence on the region and the judiciary as a whole, as well as her undeniable kindness and strong leadership.