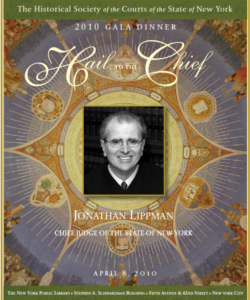 HAIL TO THE CHIEF
Jonathan Lippman, Chief Judge of the State of New York

In 2009 Judge Lippman succeeded Judith Kaye as Chief Judge of New York, and in 2010 the Society recognized the new Chief at that year’s Gala. Judge Lippman already had a distinguished career in the New York courts, rising from an entry-level court attorney position to become Presiding Justice of the Appellate Division, First Department before being nominated for Chief Judge by Governor David A. Paterson.