Eight hundred years ago (June 19, 1215), England’s most powerful feudal barons gathered at Runnymede, on the banks of the river Thames to force King John to formally recognize their traditional legal rights by signing a charter known as Magna Carta. Divided into 63 chapters, Magna Carta established the crucial principle that the “law of the land” existed independently of the monarchy, and that the king was subject to it. The charter also recognized the rights of the barons to trial by jury, due process and habeas corpus.

Widely considered the foundation of the English and U.S. constitutional systems, Magna Carta is the source of modern constitutional concepts such as government bound by law (rule of law), impartial justice, and representative government. 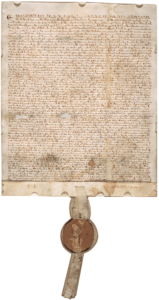